The back of an image 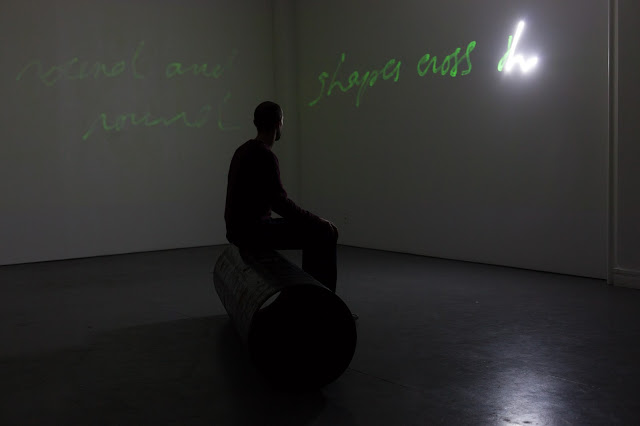 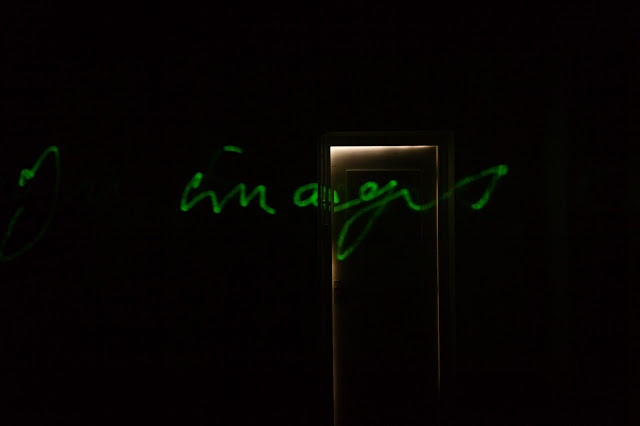 The back of an image (film), 2013
Installation with moving head light projection, phosphorescent walls; 32 mins; looped 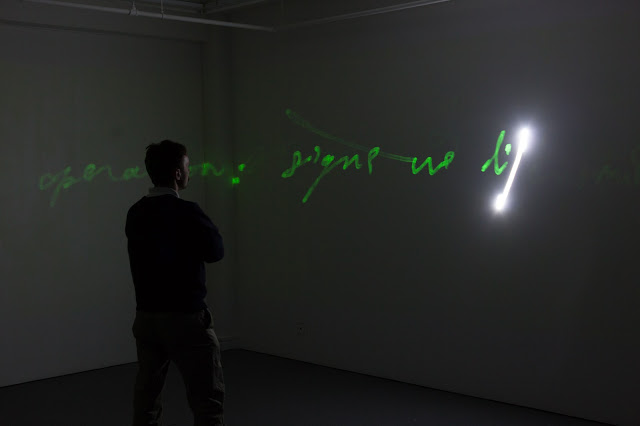 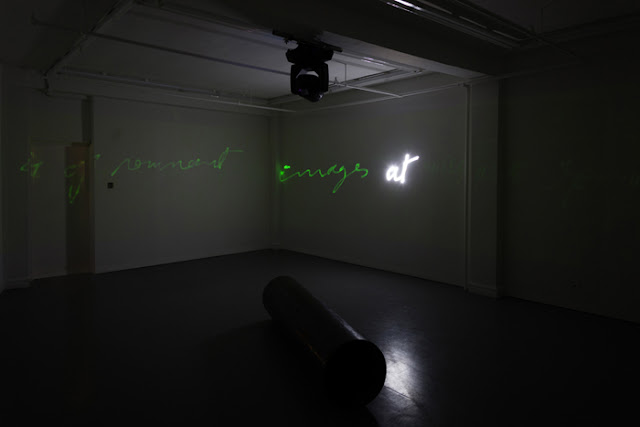 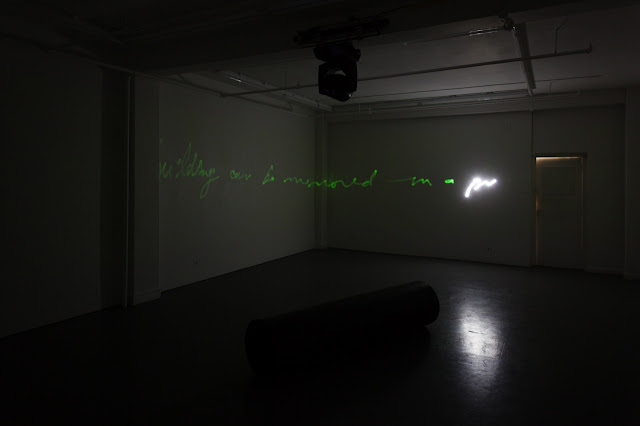 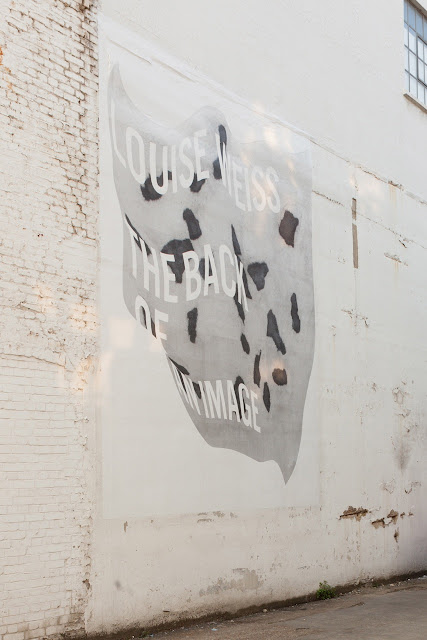 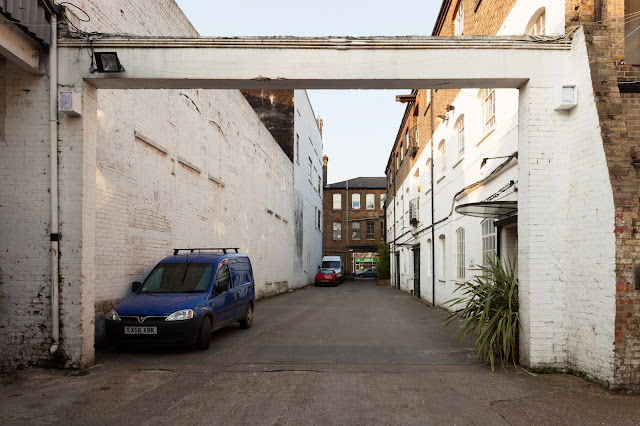 The back of an image (audio), 2013
Two audio recordings, installed in consecutive spaces; 6 mins; looped 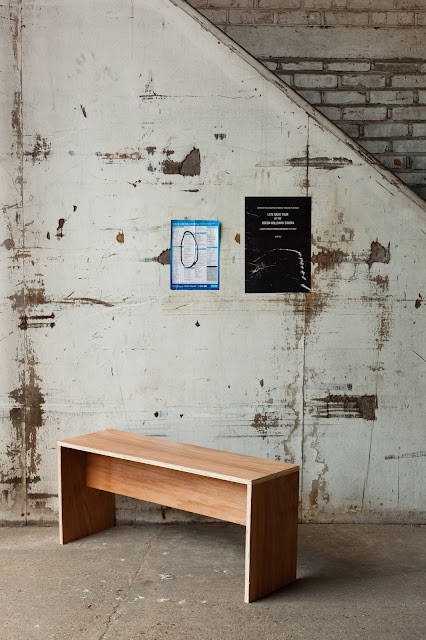 The back of an image (screen), 2013
Plywood bench; cinema programme, Odeon Holloway; colour laser print on paper advertising a guided tour of the cinema. 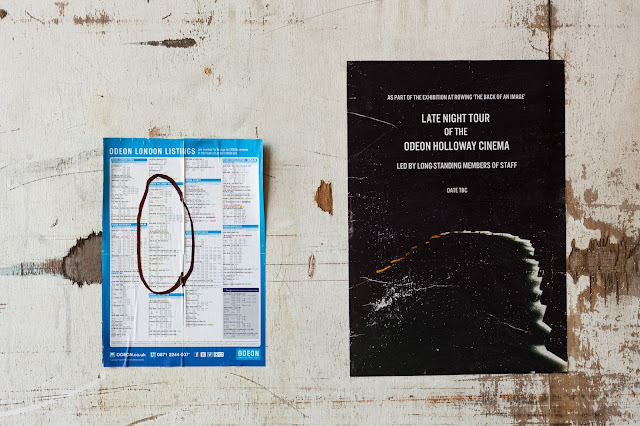 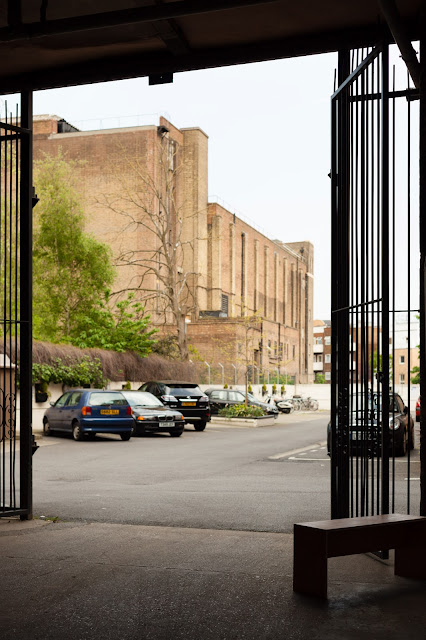 
The Back of an Image is a solo exhibition at Rowing by Olivier Castel, under the name Louise Weiss. The exhibition takes the proximity of the Odeon Holloway as its starting point, a purpose-built 3,000-seat cinema constructed in 1938 by the Detroit-based theatre architect, C. Howard Crane. Viewed from the yard, the cinema’s vast rear brick facade, the back of the original screen, situates the exhibition at the 'back of the image'. The exhibition comprises a series of installations and interventions inside and outside the gallery space, each exploring various elements of cinema: image, light in motion, audio and the screen itself.

A huge poster, half the size of the gallery and pasted onto the wall of the building opposite, announces the exhibition: a black and white photograph of a chance collage by Hans Arp overlaid with text – The Back of an Image. Undulating and deformed, the image appears detached from the surface of the wall as if it were about to float away.

Inside the darkened gallery a revolving projection traces handwriting across the walls, which are painted with phosphorescent pigment so that the words glow back after the light has passed. The text is made up of a series of notes, quotations and doodles exploring relationships between gesture, surface and image and proposing the notion of a film without images. This work presents a film reduced to its most basic elements – light and movement –in order to consider image in its absence.

Two overlapping soundtracks are installed either side of a brick arch in the yard outside, imitating the cinematic editing technique known as the ‘L cut’, in which audio from the following scene can be heard in the final seconds of the preceding one. Here a filmic score (commissioned but unused by Kubrick for a scene in 2001 Space Odyssey set in a spacestation docking bay), transitions into a field recording made in a carpentry workshop further along the yard, with the arch marking the cut in the image.

Around the corner a bench is positioned with a view onto the back of the original screen of the Odeon cinema, appearing from behind as a vast brick wall. The cinema’s auditorium was badly damaged in 1944, and, since 1973, the single screen has been subdivided and the cinema is now a multiplex with eight separate screens. The outer walls and foyer are the only original parts of the building remaining and a guided tour of the building has been organised in order to explore the rooms and corridors behind its façade.

Software programming by Sebastian Lexer, Incalcando
With thanks to DHJ Specialist Joiners. 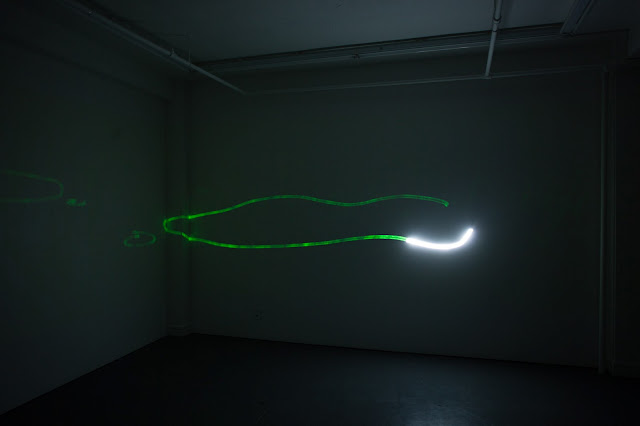 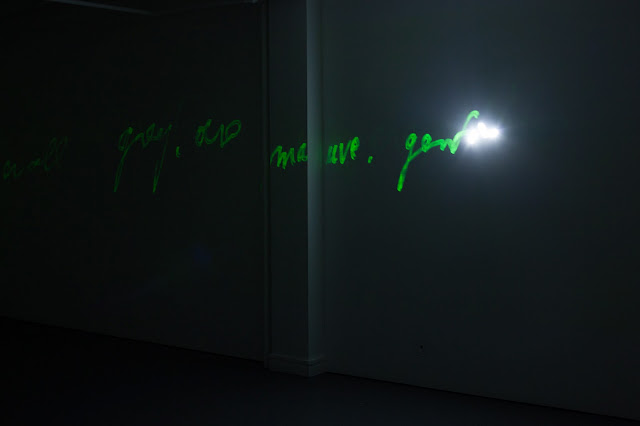 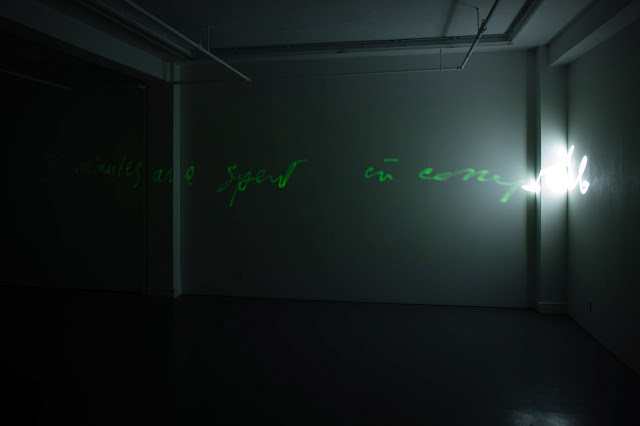